A long history of experts

Since 1919: five generations of glaziers

The story of the Vanasbroeck glaziers began close after the First World War.
Léopold-Henri senior became an independent entrepreneur. He opened up his window shop in Audergem. At the time, this was a village in the suburban area of Brussels.
At the age of 14, Henri-Léopold senior started working in his father’s family business. He bought his first cart with small rack to transport his windows.
Léopold-Henri II, grandson to Léopold-Henri senior, worked closely with his father for a couple of years. Unfortunately he died prematurely.
Henry-Léopold junior was raised by his grandparents. While growing up, his grandfather taught him the profession of glazier.
After the death of his grandfather in 1961, he started working for his own account. In 1963 Henri-Léopold junior married Nicole De Brul and moved his business to Wezembeek-Oppem.
Together, they expanded the business activities while respecting the family traditions. Their company grew. Henri-Léopold was in charge of the work floor. Nicole seconds her husband and takes over lead of the instalment team. She’s also responsible for the accounting, the administration and customer handling.
In the beginning of the 1960’s, their core business was the installation of single glazing in new window frames. A couple of years later, they began to install their first double glazed windows. A wide window frame was a necessity for the instalment of double glazing.
After 1976, their activities refocused only on the installation of double glazing in existing window frames, without changing the look of the old window frames.
Léopold-Henri senior’s great-great-grandson, Philippe, entered the family business in 1986. Ten years later, in 1996, Philippe became an associate. And thus he became the fifth generation of professional glaziers in the family Vanasbroeck. In 2000, he took over the leadership of the company and to this day he remains in charge. 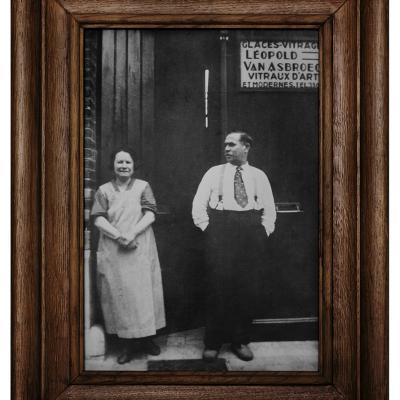 When chance helps a hand

In 1973, a wrong order of window frames resulted in the discovery of the Vanasbroeck / Renover speciality.
Instead of receiving a wide window frame fitted for the installation of double glazing, a narrow frame turned up.
Henri-Léopold developed a method to broaden the window frame at the spot. He learnt to apply this same method with success to old window frames.
As a result of this success, it is no longer necessary to change the window frames in order to gain double glazed windows.

Since 1976, the company’s activities refocused only on the instalment of double glazing in existing window frames, without changing the look of the old windows frames.
To date, the different installation teams have successfully completed more than 10.000 realisations in traditional houses, mansions or listed buildings.

If you are an architect or a technical adviser in the construction sector… participate in one of our information sessions.